You learn the best when your device loses power. That’s when you drop down from your wish-world to hear the music of life around you.
Ugyen the young teacher in Bhutan was dreaming of escaping to Australia. Then he was posted at the most remote school in the world in Lunana, a tiny village nestled among the clouds.
He had come to teach rather reluctantly, but he kept learning as his device waited for solar powered resurrection.
He learnt the value of all that was around him. Like that of a piece of dried yak dung when you need warmth and food.
In what passes for the classroom, A can be for Apple and B for Ball, but C cannot be Car. Because no one knows here what a car is. It must make way for a Cow.
The aspiring musician, used to applause in the bars, learnt that a song is an offering to all beings and spirits. And that one must sing like the black-necked cranes. They are not concerned with who is listening.

See Lunana: A Yak in the Classroom

This film is the directorial debut of Pawo Choyning Dorji, the Indian-born Bhutanese filmmaker and photographer. Lunana: A Yak in the Classroom was nominated for the Best International Feature Film at the 94th Academy Awards (where a slap during the presentation won all the headlines).
Bhutan is a country that measures its economic and moral development in terms of gross national happiness. As an integral part of this, education is a must in every remote corner of the country. No wonder, the entire 56 people of Lunana walked two hours to welcome the teacher, who they hoped, as the village chief put it, “will give these children the education they need to become more than yak herders and cordyceps gatherers.”
A herder teaches Ugyen a folk song that celebrates the sacred bond between herders and their yaks. Later, far away in teeming Australia, as the indifferent patrons of the bar where he croons for money ignore his rendering of a popular number, he stops singing.
Then, from his heart, rises that folk song. It was his offering to himself.
Even if you are not into lessons, watch this film for the breath-taking views and its sheer simplicity. Or to simply tune into what is around you.

The new C is in the spotlight. The old C remains. There is no masking the fears about cancer. And there is no distancing the misconceptions.
Chanda. The name of the girl is not. But the snatches of conversation, more about her cancer than her, are all real.
Father to doctor: “She keeps getting fever and is so weak.”
Doctor to father: “Your child has blood cancer. We will have to start chemotherapy.”
Mother to father: “But she is only five. How can she have cancer?”
Chanda to mother: “Did you fight with Papa again? Don’t cry, I am there for you.”
Father to mother: “Never again will we cry in front of her.”
Father to mother: “I have no money left. Don’t know whom to ask. Let’s release an appeal.”
Stranger to parents: “Saw your appeal. Oh, she likes cars! Come, bring her, let us go for a ride. Keep this money. Why does it matter who I am?”
Mother to school principal: “Doctor said she is recovering and can start school. Please admit her.”
Principal of school 1: “If other parents come to know, they will withdraw their children. As it is, we are constantly fighting with parents.”
School 2: “What if her cancer spreads? Other children will also get it.”
School 3: “We can’t let her skip class every time she has to go for treatment. What is the guarantee she won’t get it again?”
School 4: “She must always wear a mask, sit separately and not mingle with other children.”
Mother’s letter to father: “I am going. I don’t want to spend the rest of my life looking after a cancer patient.”
Chanda to father: “Why are you crying? I am there for you.” 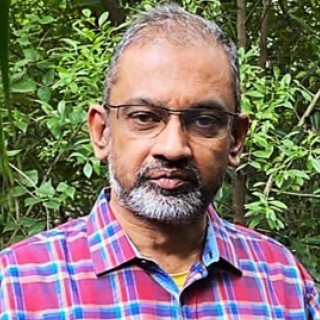